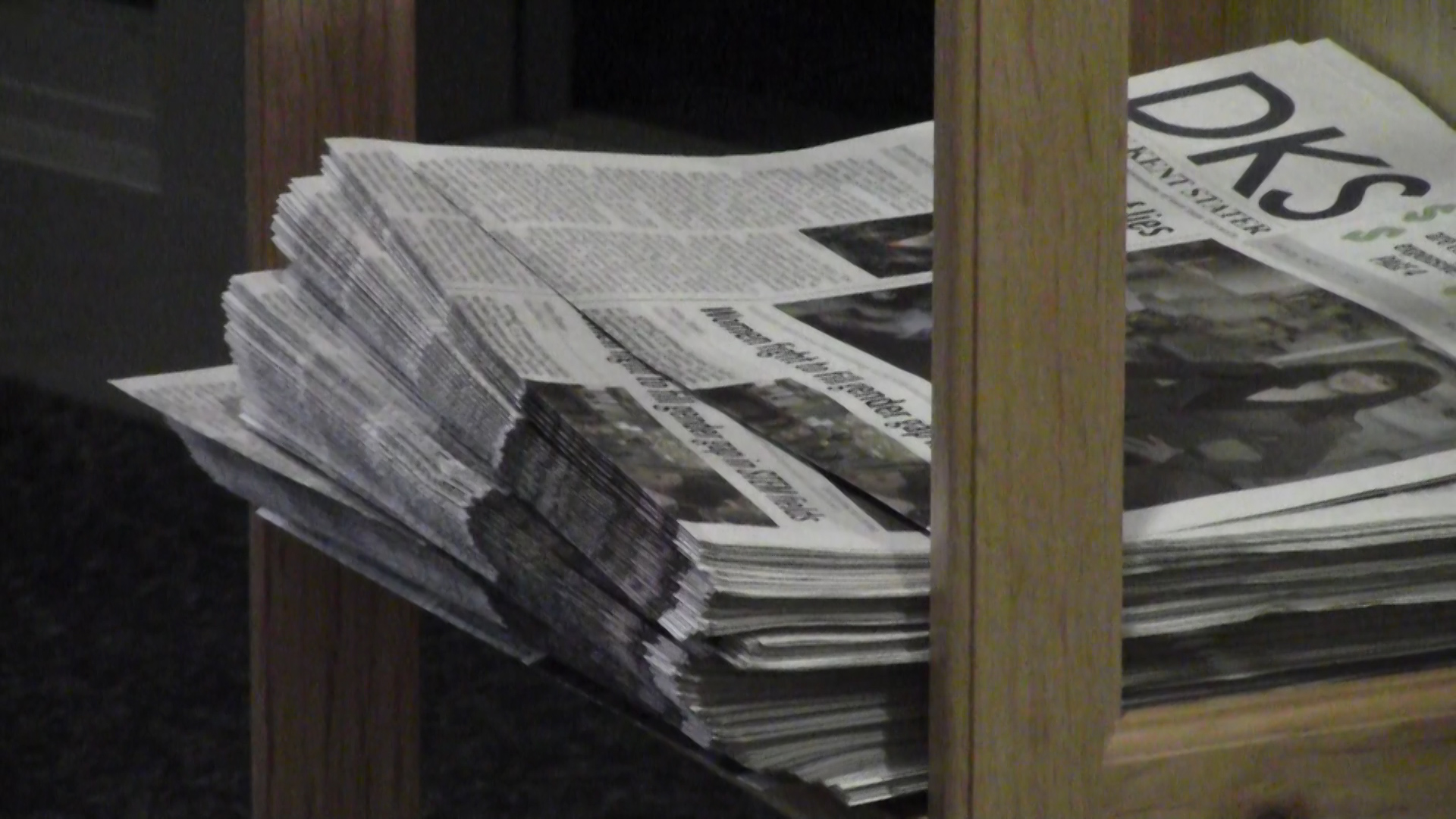 Kent State’s student media budget is decreasing due to a lack of advertisers  in The Daily Kent Stater newspaper. With the decrease in funds, managers of the paper are pushing for more online content. TV2’s Vivian Feke has the story.

[bbrvideo width=”350″ float=”left” caption=”Kent State’s student media will focus on its website, in order to encourage multimedia content while not increasing printing costs.”]BBR_05A_Feke_StudentMediaBudget[/bbrvideo]

Kent State University’s student media units will be forced to scale back their products in order to save money, starting this summer.

The Daily Kent Stater, student media’s independently run newspaper, is the largest source of income out of all the student media units.

Although the newspaper is popular within Kent’s community, Lori Cantor, manager of student media, said the paper’s strength remains in the past.

“People are not reading newspapers like they used to. We live in a digital world.”

“People are not reading newspapers like they used to,” said Cantor. “We live in a digital world.”

Cantor said the way people consume their news has changed. Now people get their source of news from online, or other ‘on-the-go’ sources like cell phones.

Cantor estimated for the upcoming year, the Daily Kent Stater will see about $40,000 less advertisement revenue than the year before.

Sue Zake, former advisor of the Daily Kent Stater, said the Stater should embrace the changes in storytelling.

“The forms are changing all the time, storytelling potential is awesome,” said Zake.

Editor-in-Chief of the Daily Kent Stater, Daniel Moore, hopes the loss of revenue will encourage students to think more digitally.

“The way the industry is today, it forces us to change,” said Moore. “We haven’t changed a whole lot in the past 15 years or so… we’ve been really resistant.”

Although the loss of advertisements in the Stater is disappointing to many students, Cantor said it can serve as a wake up call.

“It’s not a good thing that we are in the situation we are in – but it forces us, it forces student media, to realize we cannot continue to do things like we’ve always done,” said Cantor.

Currently the Stater prints five days a week, but starting this summer, newsstands will remain empty.

Members of the School of Journalism and Mass Communication’s task force, a group that meets weekly to discuss student media budget issues, want to focus on the news website, KentWired.com. Not printing a weekly Stater will save money, and push students to think about producing online multimedia content.

In the fall of 2014, the task force is weighing the options of a three or four day paper, instead of five.

“I think the Stater could print three, four, five days,” said Moore, “but if we aren’t reaching our audience online, then we aren’t doing our job.”

Moore graduates in May 2014, but if the Daily Kent Stater is reduced to fewer days in the fall, he is hopeful the staff will rethink the way it publishes content.

The task force will continue to work to find the best solution to the budget situation, but the majority of the task force does think student media needs to focus on multimedia content, and online stories.

“I think this is a long time coming,” said Moore.

The decisions will be finalized by late April.