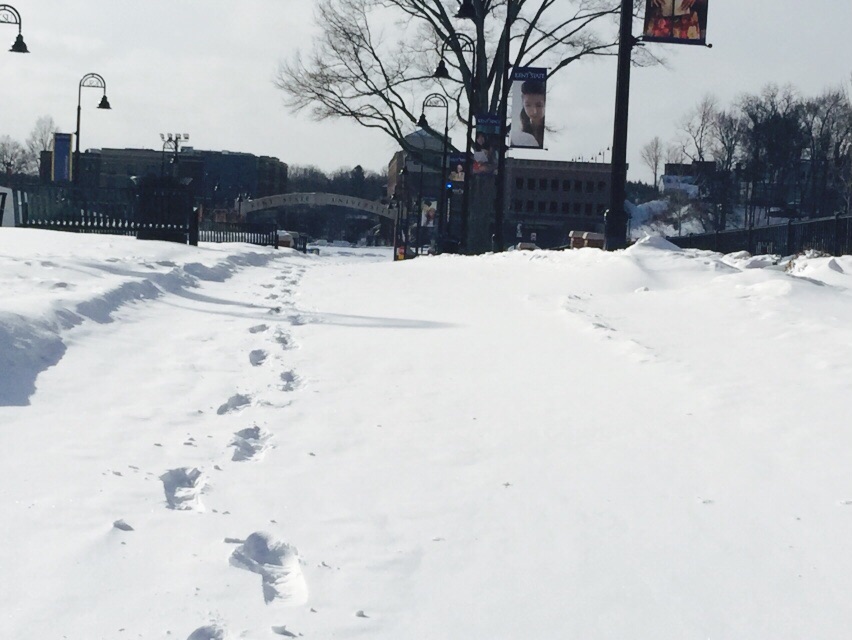 Anchor Intro: Jack Frosts clutch is on Kent State. The university has been experiencing a winter for the record books with extreme snowfall and record low temperatures. this has caused a headache for students who rely on the constant icy sidewalks to get to class and for junior Kim Zimmerman this headache has become slippery and dangerous.

Kim Zimmerman: I just fell on the ice and I scratched my leg and my hand and a bruise on my other hand and scratched my wrist too.

Stand up: she fell and injured herself here on campus falling because of ice build up on the sidewalk. Leaving Zimmerman questioning what the campus is doing to fix these slippery conditions.

According to grounds Keeping supervisor Rebekah Berryhil the campus has 35 full time staff members with additional student labor. The University uses over 400 tons of salt a year for the roadway and sidewalks around campus, but conserves its use in non major storms to limit the salt content in the storm sewers and rivers.

Kim Zimmerman:I have to walk up this giant hill on campus and walk back down it and a couple of times I have to tread through the snow because I can’t even walk on the sidewalk.

Anchor:The university keeps bins of salt in especially icy and hilly part of campus but this still wasn’t enough to stop Zimmerman from slipping

Zimmerman:its just all ice and I’ll fall going up and fall going down.

Anchor: Since the beginning of January the university has had at least one snow removal crew on the clock 24 hours a day.