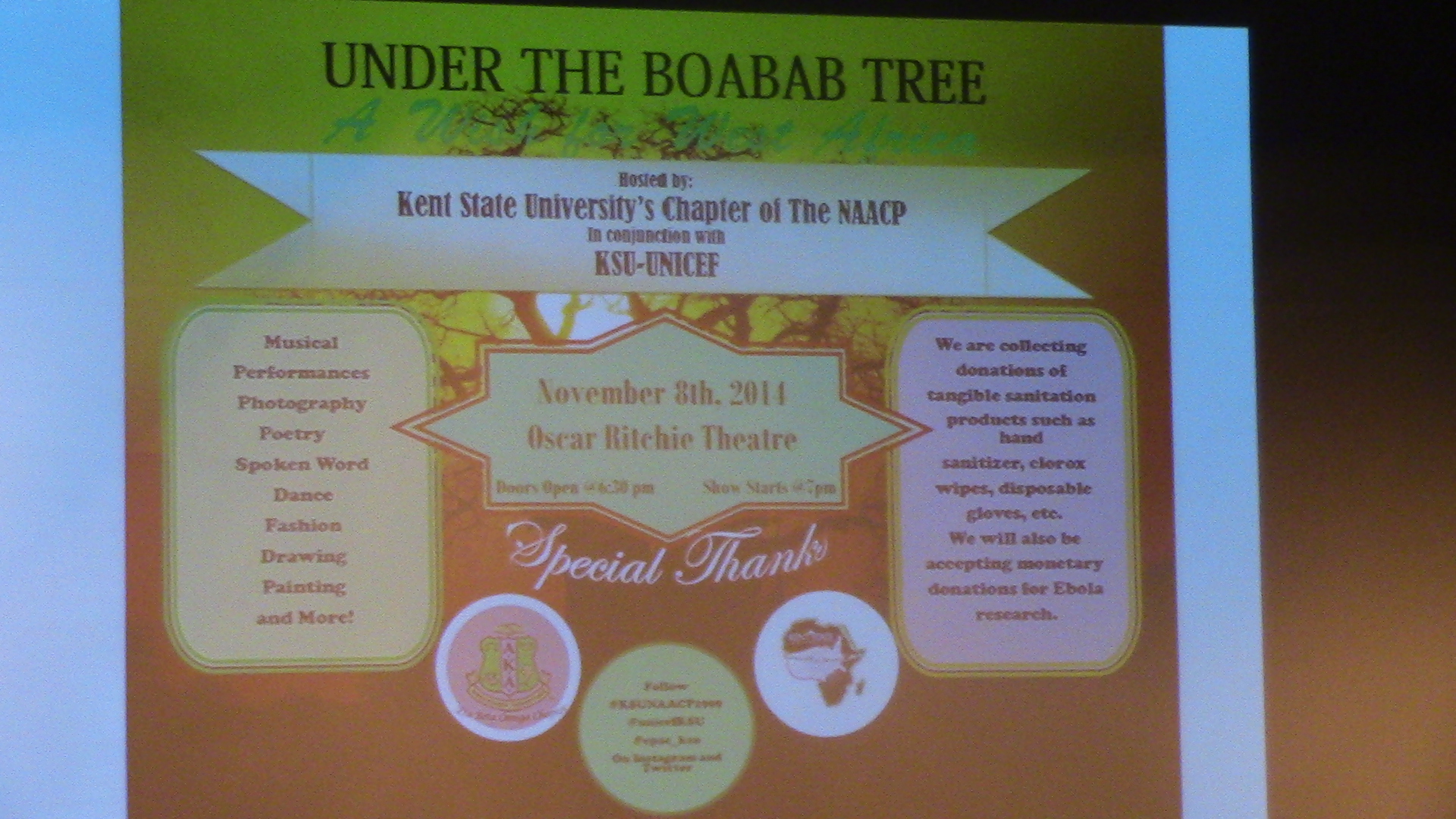 It is said that showing you care is more than just sending a few kind words, and there is an event on campus, that wants to prove that statement true. Its called “Under the Baobab Tree; A wish for West Africa.” The event named after a tree that grows  only in West Africa was set up by a collaboration of different well known and some unknown groups here at Kent State. Reporter Kayla Hodge is here with more details.

Ebola has been making headlines for weeks, as more stories surface of people getting infected, coming in contact with infected people, or just being plain freaked out about this deadly virus. With Kent having its own brush with Ebola, what are people here doing to help?

Well one on campus organization is doing its part to lend a helping hand. Sister Circle, partnered with the NAACP, UNICEF, VICAP and Alpha Kappa Alpha Sorority Incorporated came together this past Saturday evening in support of “Under the Baobab Tree: A Wish for West Africa.”

This event was held in Oscar Ritchie Hall at 6PM Saturday evening, and it brought the community, students and the faculty together in order to send sanitation products to West African Countries affected by Ebola. After donating, people were welcomed to watch the talent show that was put on by Sister Circle as a way to say thanks for the donations.

Garmai Matthews, who is the president of Sister Circle, and who is also a West African Liberian Native says she feels an obligation to help her homeland.

“The Ebola epidemic in this particular event is very important to me, because I do have family that is in Liberia and they are trying to stay completely away from this horrible disease or virus.”

People were asked to bring in items such as; hand sanitizer, plastic gloves, disinfecting wipes and anything else that can be used to prevent the spread of germs. These items along with some hand made art pieces donated by students will be shipped off to West African Countries such as Liberia, Sierra Leone, and Guinea just in time for the holidays.

As a thank you to those who donated items, Sister Circle invited all the guest to sit and enjoy a talented showcase made up of Kent State Students. The talent ranged from, spoken word poems, drum playing,  African dance, piano playing, guitar solos and even a violin soloist.

Students were eager to help and give back for the cause, as they poured into the event, they brought lots of donations for the pot. One student was more than happy to do her part, and she says not because she felt like it was nice, but because she says it is her duty.

“I just feel like it’s important for us to give back, not only because we are privileged enough to do so but because, I feel like it is our duty to help those who are in need.”

At the end of the event “Under the Baobab Tree: A wish for West Africa” helped gather over 200 sanitation items, and Matthews feels that was an awesome outcome. For TV2 News I’m Kayla Hodge.