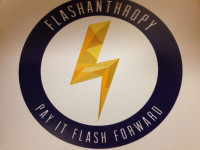 ANCHOR INTRO: What these students are doing is raising money towards your education.

Flashanthropy is Kent State’s student-run philanthropy group. Their goal is to spread the awareness of philanthropy through fundraising and various events on campus.

Flashanthropy President Andrew Cappuzzello thinks the group is a unique way to give to the student community.

“So, I gave it a chance and went to one of the meetings and kind of liked what they were doing. It was not business all of the time, but we have a lot of fun with it. We don’t just work to fundraise our own scholarship, but we work to reach out to other groups doing fundraising missions.”

The group generates most of its funds towards its Pay It Flash Forward Scholarship where three winners are picked and are rewarded $2,500 dollars respectively.

Flashanthropy advisor Taylor Police says the scholarship is very beneficial to its winners, but to the people who contributed as well.

Flashanthropy raised more than $100,000 for the scholarship this year, an effort that helps to underscore the importance of philanthropy at public universities like Kent State.

The university has more than $648 million to educate its student this year, but only 24 percent of that amount come from the state of Ohio.

“Philanthropy is huge for the university because it costs a monumental amount of money to have this university run to its highest stability every year.  We need generous donors and we need more of them.”

More than ever, philanthropy is keeping the Kent State community afloat.