ANCHOR INTRO: “Baseball has been called Americas pastime, but what would entice someone to go all the way to Northeast Ohio to play it? Kent State’s Baseball team, and it has built a winning reputation over recent years bringing recruits from all over the country. Reporter Justin McKinney found out more about Kent State Baseball’s recruiting trail…”

Baseball was first played in 1845, but it didn’t start at Kent State until 1915. Five years after the school opened.

Though Zach Spangler said the College World Series didn’t have a huge impact on his decision.

When asked about it he said “I mean yes and no. Mainly Kent State is known as a winning program with a winning tradition. Blue-collar program, great people, great coaches and it’s just the kind of people you want to be around.” 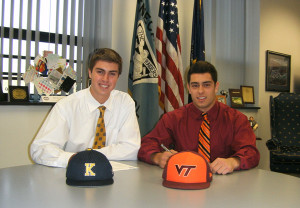 This goes to show that Kent State Baseball has built a reputation that catches recruits eyes.  Redshirt freshman Patrick Dayton is proof of that.

“The biggest adjustment I did have to make was the weather. In California you don’t see that much weather, especially snow.” said Dayton.

With continued success there will always be people who root against you, but there are also people who want to join you.