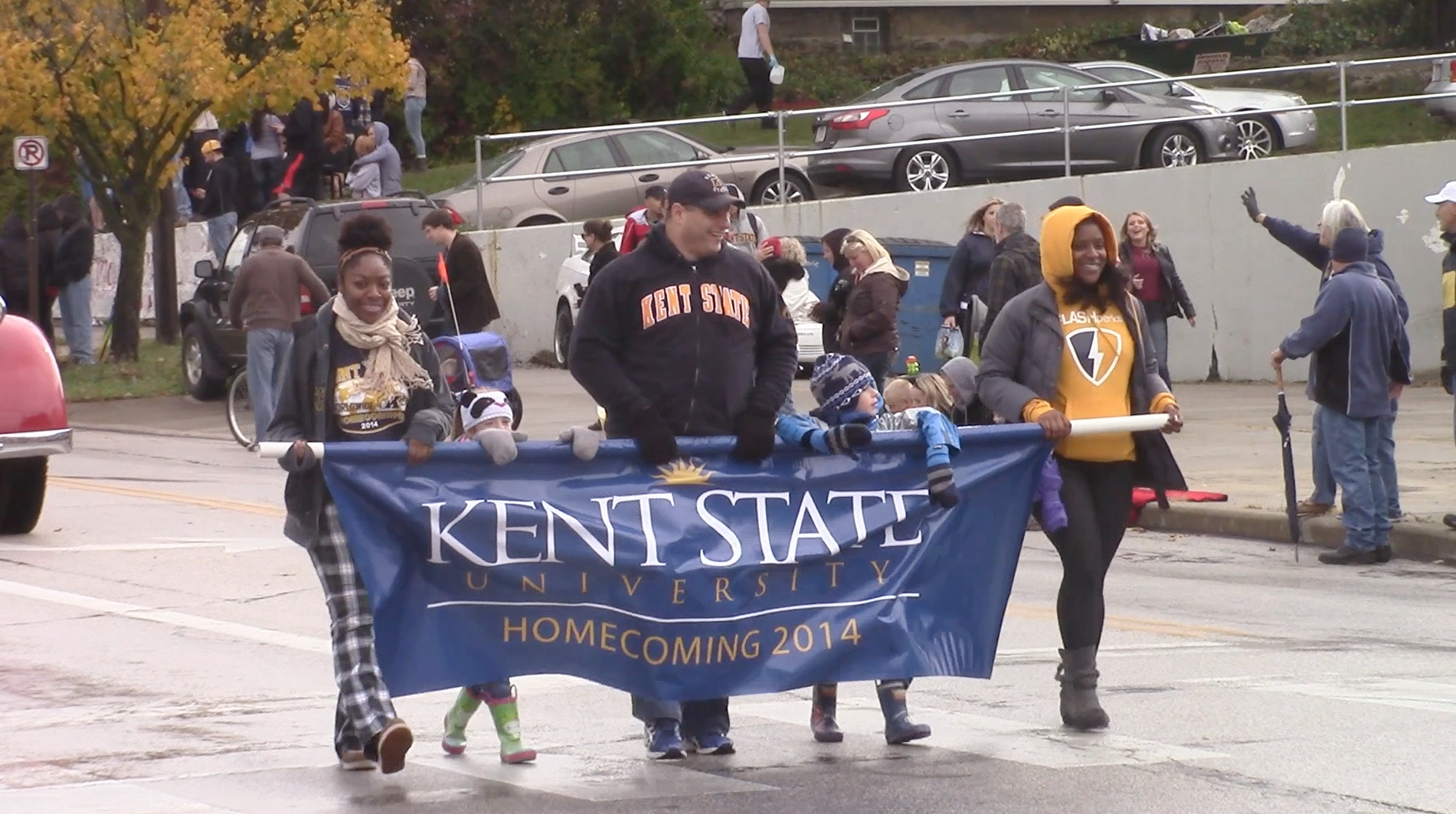 In Kent, Ohio the sound of drums and sirens rang in Kent State University’s 2014 homecoming. Michael Lopick is here with how this little parade has a big impact on Kent State students, community members and local businesses.

Early on the morning of Saturday, Oct. 18 a drum roll signals the start of Kent State University’s 2014 homecoming parade. The parade, which winds from KSU’s campus down to the heart of downtown Kent, not only kicks off the start of the homecoming celebration, but serves as a way to connect the college to its namesake town and the people and businesses that reside there.

Both Kent State Students and community members braved the gloomy weather to enjoy the fall festivities and show their Kent State pride. This year, the parade started off with spectators’ heads pointed toward the sky as Kent State’s Aeronautics program flew in formation just overhead.

Evening anchor for WJW Fox 8 News Cleveland and 1994 graduate of Kent State Tracy McCool waved happily at students and community members as the official Grand Marshal of the parade. McCool rode just behind university President Beverly Warren, in her first KSU homecoming, who shouted “go flashes,” along with other encouragements for the pending football game to wild applause.

Cheyenne Laflin, a Kent community member, loves going to the parade each year because of the sense of community it builds between KSU students and Kent locals.

“I like going to the parade because it’s a really great way to get with the community and it’s a really social experience that everyone goes to. I also really like watching the bands,” she said.

Besides providing the university and surrounding community with a way to connect, the Kent State homecoming parade also benefits local businesses like Kent State’s Campus Book and Supply.

Campus Book and Supply, located at the corner of Main and Lincoln, is in a prime position on the parade route to capitalize on all the new faces it brings to its doorstep.

Worker Julia Neely explained how the parade gives the store a chance to create new business as students’ parents and family visit them during homecoming.

“The parade draws in a lot of people from all over, so they’ll walk down Main Street and say ‘oh, what’s that tent?’ and then they’ll stop in, come by and get some sales,” she said. “Then they’ll tell their friends and as they’re cheering on their sons and daughters or those in fraternities, sororities and those in the band their parents and relatives will stop in.”

Next year the parade hopes to be bigger and better to bring even more students, community members and businesses.