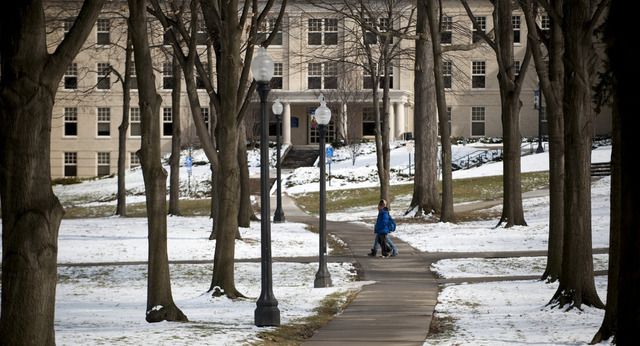 Construction can be a real pain for students on campus, but students aren’t the only ones who are affected by this $200 million dollar operation going on all over Kent States grounds. Groundskeepers here at Kent are also affected by the construction.

I sat down with Heather White, the Facilities Manager here at Kent, and she gave some insight into just how much this construction has affected the groundskeeping on campus. White overseas all the grounds on campus, from making sure the football field is nice and tidy for the athletics department, utility digs if there is a water main break, snow removal and even tree trimming.

White says while they are not directly involved in the construction on campus, they do play a role in the grand scheme of things.  Grounds takes over after construction is finished and the project is turned back over to the university, the grounds crew will be in charge of laying down grass, flowers, shrubs, trees and anything else that needs to be placed around the new buildings in order to help intergrade the buildings. The biggest part White says is keeping the construction and the workers inside their designated work space.

This helps the grounds crew know where they can work and keeps a clear line between construction work and groundskeeping. When the projects are completed the grounds crew will start to integrate those buildings back into the work schedule, and make the time to maintain it all.

For White, she says this construction plan has not hindered the grounds crew that much, in the past years they have had some serious difficulties with construction on campus. But this time they have been pretty well versed in dealing with the construction. The biggest obstacle however is routes through campus.

With most of the sidewalks on campus being blocked off and gated up, students aren’t the only ones having to find new routes to buildings on campus. The golf carts used by the grounds crew often have to find new ways around campus because they are not allowed to drive them in the streets.

White says that the grounds crew is aware that the school still has events they need to put on all over campus, such as homecoming, welcome weekend for freshman, commencement and many other events. so the grounds crew does as much as they can to keep the school looking its best, but there is nothing she can do about the ugly construction gates next the beautiful landscape created by the grounds crew.

Its all a balancing act says White. While the construction has saved the grounds crew a lot of work over the summer, it will be another task entirely to reintegrate theses buildings back into the work schedule. In the future White says there will be a refreshed landscape for the new campus once construction is complete.