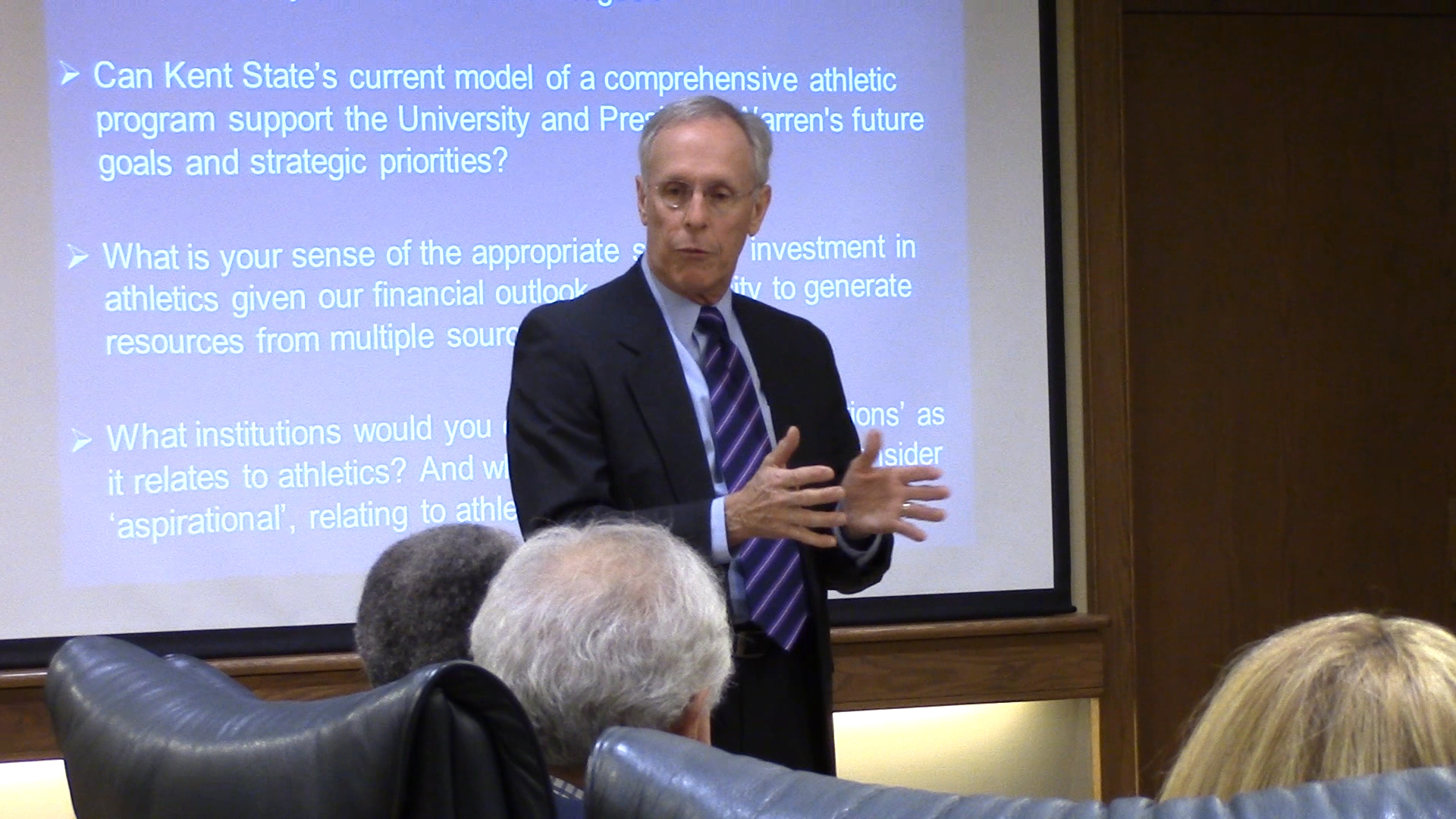 The NCAA will hold an autonomy meeting next month to discuss possible changes to its guidelines, including possible compensation of student athletes. But is Kent State ready for what might be ahead? TV2’s Tyler Carey has more.

With the NCAA set to hold an autonomy meeting next month to discuss the changing landscape of college athletics, the Kent State board of trustees held its own discussions on the topic during their meeting last week.

Members of the committee of the whole spoke for roughly 45 minutes on the issue, with much of the discussion centering around the possibility that student athletes are about to receive some type of compensation.

“In my 35 years of working in collegiate athletics, there is less confidence in the NCAA, and more concern over money and power than has ever been the case before,” said Turner, who now directs a consulting firm known as Collegiate Sports Associates.

One of the main topics discussed during the board meeting was an online survey sent out to members of the Kent State community asking them their opinions on matters pertaining to intercollegiate athletics.

Roughly two thirds responded, and while the full results won’t be released until March of 2015, Nielsen was pleased at the consensus belief that Kent State conduct its programs with integrity and honesty.

“We haven’t compromised the type of student athletes we bring to campus just for the sake of winning,” Nielsen said. “Our coaches do such a great job of identifying student athletes that can be successful first academically, athletically, and then socially.”

The survey also indicated that KSU faculty are committed to a broad athletic department, instead of one just centered around a few sports. This has been highlighted in the school’s sustained success in “non-money-making” sports like baseball and golf.

While this is not a bad goal to have, it can be difficult to sustain an athletic program when the so-called “money-making” sports of football and basketball aren’t making a whole lot of money. Because of this, Kent State is one of the vast majority of Football Bowl Subdivision (FBS) athletic programs that fail to make a profit, with much of the money made by athletics coming from subsidies.

Only 22 out of nearly 130 FBS programs actually make money, with the vast majority of those coming from the “Power Five” conferences (ACC, Big Ten, Big 12, PAC-12, SEC). These schools make massive amounts of money due to increased national exposure and approximately 20.3 billion dollars in T.V. contracts.

Because of this massive cash cow, the debate of whether athletes should receive at least a piece of the pie has reached a fever pitch, and while the Power Five conferences have indicated they will start paying athletes the cost of attendance, the MAC and other smaller conference have also claimed they plan to do so. But with revenues being so much different between the two, Turner isn’t sure how the vast majority of schools will be able to offset the cost.

“Where they’re going to get the money from, that they haven’t said,” Turner said. “I think of you put athletic directors in the room and said, ‘Where are you going to get this money?’, they would turn around and look at the President and ask that question.”

KSU officials hope to have a better plan in place before college football’s national signing day on Feb. 6.