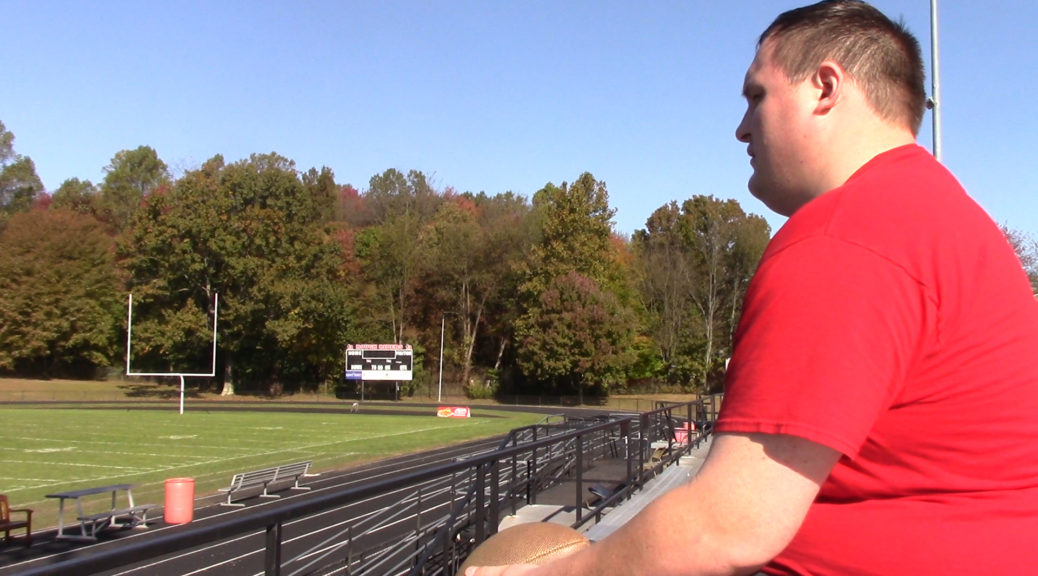 “Ryan always towered over everybody. He was built to play football,” Sharon Zurbrugg said. She is the mother of Kent Roosevelt standout offensive lineman Ryan Anderson.

Indeed, he was a freak of nature. As a freshman, he recorded a height and weight of 6’4” and 260 pounds and counting! He ran a 40-yard dash in five seconds and bench pressed 225 pounds 15 times. However, Anderson said that his greatest strength was his legs, squatting 585 pounds three times!

Anderson’s versatile skillset and superhuman stature caught the eye of Roosevelt’s legendary coach John Nemec who eventually made the decision to start him on varsity after an upperclassman went down with an injury.

“The thing that really impressed me the most about Ryan is he matured very early. And, as a 9th grader, he was able to play on our offensive line on a pretty good football team,” Nemec said.

“To say that a big school wanted me was definitely gratifying for a 15, 16-year old,” Anderson said.

All was well until Anderson started to feel pain in his right leg during the spring season of his junior year. Initially, he thought it was runner’s knee. But on March 28, 2011, the 17-year old star prospect and his family discovered that he had been diagnosed with osteogenic sarcoma, a rare bone cancer. “I didn’t know how they were going to take it out or anything. So, it was just like the train just came to a stop in an instant,” Anderson said.

“I never really had ‘he’s going to die.’ That never really came to me. But I mourned what he was losing EVERYTHING that was going to happen,” Zurbrugg said. She is an RN. And prior to transitioning to homecare, Zurbrugg worked on the oncology floor of a hospital where she took care of woman with uterine, cervical and ovarian cancer. “I knew what cancer did. I knew what chemo did.”

After his diagnosis, Anderson’s football career officially ended. Doctors performed surgery to remove the tumor, replacing his ACL, MCL and PCL with a metal rod. Shortly after hearing the news, Coach Nemec called Ohio State’s then-football coach, Jim Tressel, who sent a box of handwritten letters to Anderson from each and every player and coach apart of the Buckeye’s football program.

Anderson and his family also received aid from the community. “The community rallied. We never had to cook, people brought us food and donations,” Zurbrugg said.

During the chemotherapy treatments, there was one thing that was on his mind: family.

“I definitely wanted to get through it to be with them. I didn’t want to let this take me away from them,” Anderson said.

He still suffers from chronic pain due to the aftereffects of the chemotherapy. Anderson developed neuropathy in his feet, which is pain normally associated with a diabetic. And, he also must be tested every three months because his high risk for disease due to the chemo treatment he had to withstand.

Despite dealing with the aftermath of cancer, Anderson managed to become a Kent State graduate and holds a steady-paying job as an analyst at AML RightSource. And, most importantly, he is able to enjoy the company of his family.