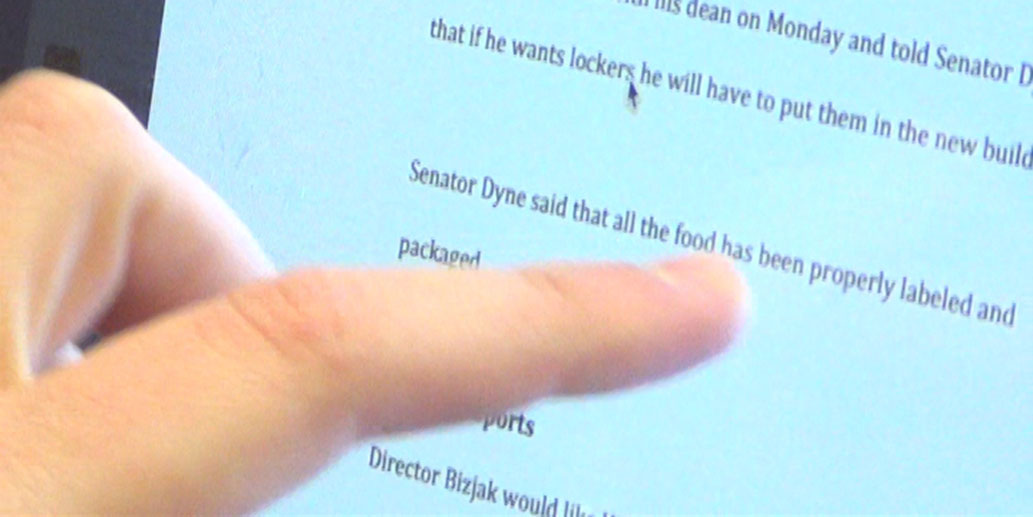 The Kent Market is a place where students can get some grub. However, a recent incident with food mislabeling has prompted one USG member to advocate a new food labeling policy. TV2’s Jon Huntsman has the story. [bbrvideo width=”350″ float=”left” caption=”USG’s Eric Dyne has a new plan to help with proper food labeling in the Kent Market.”]BBR_01A_Huntsman_StudentGovt[/bbrvideo]

As is the case with most USG members, they are concerned with issues that affect the student body.

There is one issue that has arisen over the past year that one USG member wants fixed.

USG Senator-at-large Eric Dyne, who is also running for Director of Student Advancement, has advocated a new policy that will help with the proper labeling of food inside the Kent Market and Kent dining halls.

After a mishap with mislabeled food, Dyne decided it was time to speak out.

“I had to get three shots of epinephrine, which was not fun,” Dyne said.

“And then I thought ‘this is unacceptable.’ The food needs to be labeled correctly because my allergies aren’t as extreme as others.”

Ever since the incident, Dyne has been monitoring the Kent Market, making sure that the food is properly labeled.

… This is unacceptable. The food needs to be labeled correctly…
-Eric Dyne, USG Senator-at-large

Dyne has seen quite an improvement in the Kent Market’s handling of this matter.

“Really good job and I have to thank Marlene a lot for that,” Dyne said.

Although food mislabeling is a serious issue on campus, there is one issue that’s on the minds of most students on campus: OBESITY.

Ann Klewer, a freshman at Kent State, said that obesity is an important issue on campus that is a concern for many.

“I think people are very self-conscious, especially girls, about the their body and their weight,” Klewer said.

Dyne is currently working in the obesity lab on a project to test running capacities of two different phenotypes of lab rats.

Dyne, a Biochemistry major, said he enjoys studying this phenomenon in the lab.

Food and nutrition is just one of many issues that Dyne wants to address with students.

Dyne hopes that he will be a reliable source for students and help them cope with any other school-related issues.

“I want to be a voice for all the students,” Dyne said.

“I also want to make sure that everybody is hearing the good and if there’s any bad, take care of it, particularly between any issues with USG.”

This is Eric Dyne’s new plan.