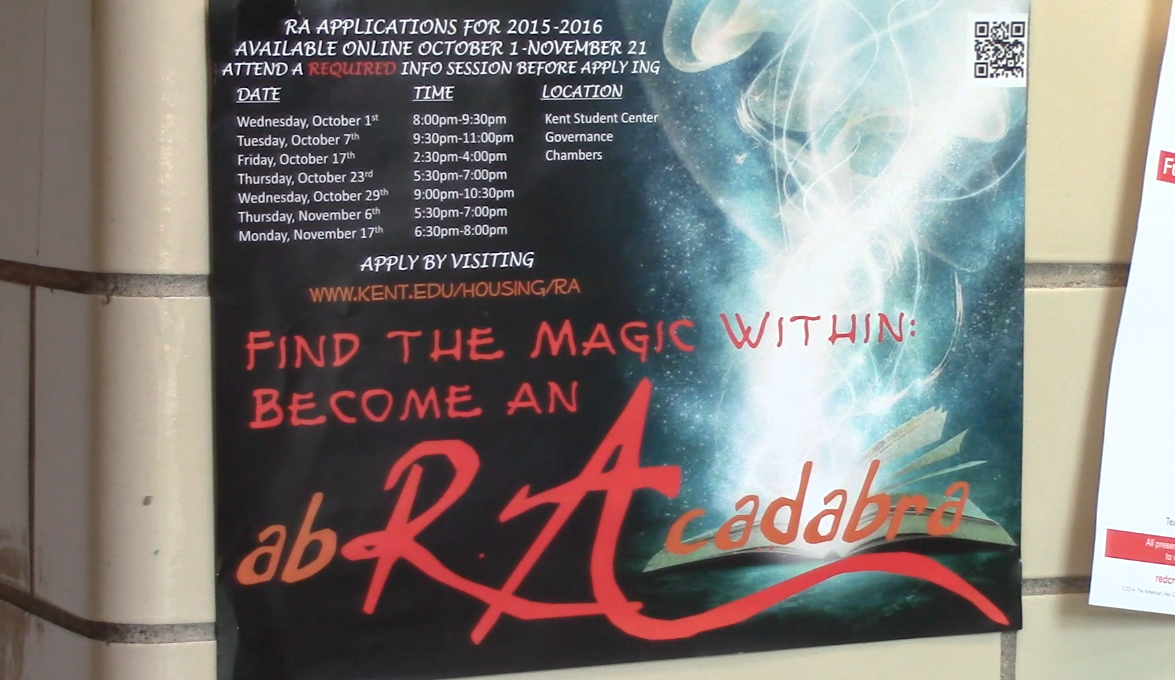 Resident Assistant recruitment began full force this week on the Kent Campus. The huge freshmen class is not only caused a housing dilemma but is affecting the appeal of being an R.A. a once very popular campus job. TV2’s Henna Thornberry has the details.

Resident Assistant, a once popular campus job is in danger of losing it’s luster and the resident assistant search committee is recruiting harder than ever this year.

Kent State University made several changes to the job requirement in the past few years resulting in the job losing some of it’s appeal. Due to a continually large freshman class and campus housing crisis, most R.A.s now have to share rooms. There is also a 28 hour work week cap for any university held job and the R.A. position fills that, so R.A.s can make no more than the 28 hour rate a week. However, one appeal that is still very much alive is that room and board are free to those chosen to be R.A.s.

Head of the Search Committee for Resident Assistants and Residence Hall Director for Manchester and Fletcher Halls Curtis Clark said that they have increased their marketing campaign a great deal compared to the past. As a result they have seen a lot of interest since the application opened in early October. However, the road to becoming an R.A. can be quite lengthy and uncertain.

To become a resident assistant, students must fulfill several different tasks, beginning with the application process. It is a lengthy process that requires a full resume. After the application is complete, Clark said students must then complete a five week workshop, but it is not guaranteed that they will even receive a position.

Resident Assistant Josh Jenkins just recently became an R.A. in Centennial Court A on Kent’s main campus. The previous R.A. completed the process and accepted the job, however he was unhappy with the changes and quit the position. Jenkins was on somewhat of a waiting list, after completing all of the training just like everyone who had positions. He said he was not aware that he would have a roommate until right before accepting the job and although it is not the most ideal situation, there are worse things that could happen.

While recent changes may have made the job less appealing, Clark said they are looking to make the job more competitive and diverse.