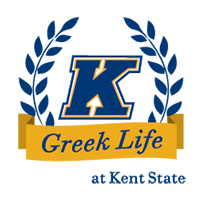 Greek Life has many connotations to it, some positive some negative. Most people who are not affiliated with Greek Life assume that all the guys are only looking to sleep with girls, and all the girls are stuck up. It is assumed that if you’re apart of Greek life that you’re rich and are paying for friendship.

Members of the Greek community beg to differ when it comes to the negativity shed upon their chapters. Often lashing out to say, it’s not all about parties and hooking up. Greek Life members will say they do a great amount of charity work for the community, and that Greek Life offers them endless lifetime opportunities to network.

Throughout the semester we will see just what Greek Life here at Kent State truly has to offer its students and the community.

To become more knowledgeable on the topic, I spoke with Kaci Mikusevich, President of PanHellenic Council for the Spring 2015 semester.

Kaci’s previous position on the PanHellenic Council was the Vice President of Philanthropy and Community Service for two semesters. Stating that when she first received the position, it had no real duties.

Kaci took it upon herself to make her position an important one since it is the part of Greek Life that is most often ignored by others.

During our talks Kaci mentioned that her previous position of VP of Philanthropy and Community Service, helped her finally decide on her major and her career goals of becoming an event planner.

As Kaci explained what her duties for the council and the Greek community, she really wanted to look for more ways to raise even more money for the various charities that each chapter serves.

Kaci said the best way to cover Greek Life and to get a better understanding for their culture would be to attend the philanthropy events.

Events such as King of Hearts and the Red Dress Gala upcoming are great philanthropies that help raise money for the American Heart Association.

Alpha Phi sorority has events and donates to them annually, stories such as what the money raised at their events go toward to help others could lead to a great story. Philanthropies are all across the board with the Fraternities and sororities to cover.

Other events would be the AFLV conference for sororities to network in Indianapolis, which is happening this weekend. Also later on in the semester there is the relay for life, Lil’ Sibs and Greeks.

There will be plenty of stories for the Historic Greek community, with Black History month right around the corner.

The story that intrigued Kaci and her Boss Meredith, was the question, does being a member of Greek Life really improve your chances of landing a job after graduation?

There will be plenty to learn about Greek life and Kaci looks forward to assisting in any way possible to make it a great semester for the members of Greek Life and these assignments.