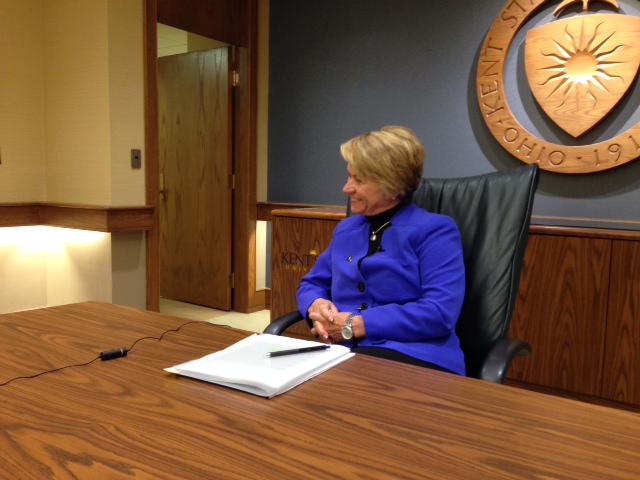 President Warren will also be present at major Kent State student events. Eric Mansfield told me that because she is more visible than our previous president getting soundbites from her should not be difficult.

I think interviewing Beverly Warren on how her listening tour went and what goals she has for the future of Kent State would make a great final story. I think that later in the year she will have a good idea of what she wants to start doing after her first semester.

One topic I would also like to cover is her schedule. Eric Mansfield told me in our interview together that she is booked solid all semester. She also gets up at 3:30 every morning. I would like to find out where all that energy comes from.

I also think that interviewing other departments on campus would answer some important questions. For example, what are people in these departments looking forward to her changing? What concerns do they have? She has been meeting with every department on campus, so what was their impression of the new president?

I would also like to get students perspective. What would they like to see change on campus? What issues would they like her to focus on? What is most important to them?

Beverly Warren has started getting involved with social media. She is currently very active on Twitter and plans to start blogging in the future. I would like to talk to Beverly Warren about how she plans to use social media during her presidency and ask students who she has interacted with on Twitter how it felt to get a reply from her.

She also has a PhD in exercise physiology. Interviewing her about her goals for overall campus health would be interesting. I could also interview other departments involved with health about what changes they would like to see on campus (for example recreation, nursing, nutrition).

Overall I am looking forward to covering these stories. Because the president is such an important person and it’s her first semester I know a lot of attention will be on her already. I’m very excited to see how her first semester goes and can’t wait to start telling the story.