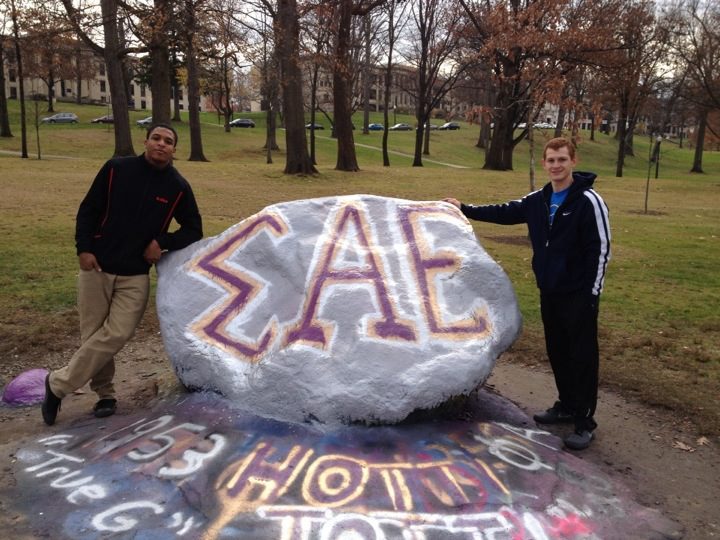 Anchor intro: Sigma Alpha Epsilon once was banned from campus made its way back to Kent State University in 2012. They are now looking to become nationally chartered, reporter Ty Sugick has more.

The Sigma Alpha Epsilon fraternity has spent the last few years rebuilding after being ousted from Kent State’s campus in the 2009 school year. The fraternity, made its way back to campus in fall of 2012, led by former chapter President Vince Dangerfield. Now under the helm of Vince’s successor, Colin Otubu the fraternity seeks to become nationally chartered again, within the next month.

The fraternity has been in colony status since 2012, which means that the group has been awaiting national approval to be recognized. Becoming chartered can be a taxing process, as there are many requirements to meet before being considered. The chartering process can take anywhere from one to three years, maybe even longer. To meet SAE standards the colony must have ten percent more guys than the campus average, be above the GPA campus standard, and meet many community service and philanthropy hours.

As I spoke to both Colin and Vince, they raved about how SAE is a brotherhood for life and not just four years. Dangerfield, who originally was in line to become a brother, before the fraternity was shut down in 2009 decided to stick with the fraternity rather than going elsewhere. He said the values of being a true gentleman was unmatched compared to other fraternity credos.

Both Colin and Vince are very confident in the group of guys they have in the fraternity, stating that the focus wasn’t just to get the numbers to be chartered, but they also wanted to make sure they had the right guys. Colin also said this process is an exciting time to give the fraternity a new start from its past reputation, in which he is very excited to be leading the charge of it all. Vince gave praise to his successor in Colin for a job well done and supports everything the chapter is striving for.

President of past and current are both striving to be legends of the Kent State SAE chapter and becoming chartered would indeed do so. They will receive final word from nationals in mid May of this year, so until now they will wait to hear their fate.