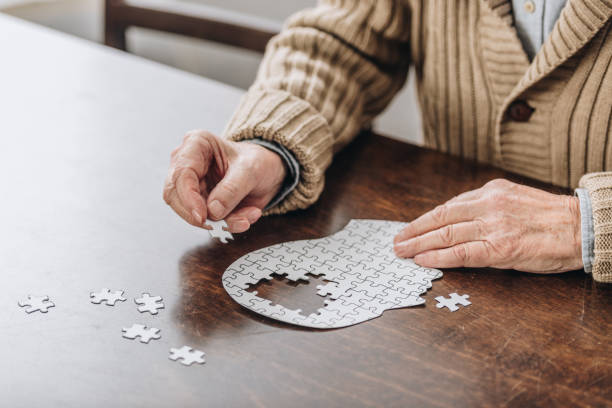 Over 6 million people are living with Alzheimer’s in America, experts say. Currently, there isn’t a cure for the disease, but some scientists and health experts are researching ways to treat patients.

Research has found FDA-approved and emerging cancer drugs could be repurposed as potential therapies for people at genetic risks for Alzheimer’s disease, according to a study published in Science Advances.

“We found in this particular paper that in individuals who carry a genetic risk factor for Alzheimer’s disease called the APOE4 genetic variant, we find certain proteins in their brain are altered,” said lead study author Dr. Madhav Thambisetty, a senior clinical investigator for the National Institute of Aging.

Alzheimer’s disease is a neurodegenerative disease that forms dementia in the brain, which causes a loss of memory, judgment, and ability to function. A build-up of proteins known as amyloid plaques around the brain triggers a greater risk for people 65 and older to attract the disease, according to Medline.

People can also develop genetic proteins such as APOE, which has three slightly different versions. The major alleles are called e2, e3 and e4, Thambisetty said.

“The APOE4 variant is the strongest genetic risk factor for Alzheimer’s disease,” Thambisetty said. “If you carry one copy of it, your risk increases significantly, and if you carry two copies, it increases even more.”

However, if someone has one-or-two copies of the APOE2 variant, they are less likely to develop Alzheimer’s, he said.

“It’s not necessarily that an Alzheimer’s patient will always have the APOE4 variant,” Thambisetty said. “It’s not … sufficient to cause the disease by itself.”

Alongside Thambisetty, a team of scientists identified brain protein changes with young postmortem study participants and compared the changes with autopsied adult brains of people with Alzheimer’s and without.

The researchers explored existing drugs and their abilities to act upon proteins linked to Alzheimer’s.

“Drugs mainly used for cancer that seemed to target some of these proteins that are also changed early on and Alzheimer’s disease,” he said. “What we did was we could test some of these cancer drugs in experiments.”

The study was conducted using a cell culture model instead of humans or animals, Thambisetty said.

“The cell culture experiments are designed in such a way that they give us information about molecular abnormalities in Alzheimer’s disease,” Thambisetty said. “So, what we can do is we can test these cancer drugs in cell culture and see if these Alzheimer’s disease-related molecular abnormalities are corrected by these cancer drugs.”

Each experiment replicated one well-established molecular abnormality among the disease, he said.

“We can create a state called neuroinflammation, which is established in Alzheimer’s disease,” Thambisetty said. “We can recapture some aspects of that inflammation in a cell culture experiment.”

After testing the protein’s response to a drug used for cancer, the results determined that inflammation and amyloid secretion decreased.

The findings from their analysis suggested that a drug for liver cancer and Dasatinib, approved for chronic myeloid leukemia, acted upon several of the disease’s proteins.

“We definitely need to do a little bit more work to confirm that these drugs may, in fact, be effective Alzheimer’s treatments,” Thambisetty said, “We might also need to design small studies in humans to show that these drugs that we know that are safe can also change the way Alzheimer’s disease progresses.”

Similar studies have also shown other drugs like sildenafil – an FDA-approved drug for erectile dysfunction (Viagra) and pulmonary hypertension (Revatio) – as a potential drug candidate for Alzheimer’s patients.

According to the findings published in Natures Aging, the research team led by Cleveland Clinic Dr. Feixong Cheng used a computational method to validate the drug as a possible treatment.

Through computational research, Cheng examined a large database compiled with over 7 million people in the U.S. to compare the use of sildenafil users to non-users.

His team found that sildenafil users were 69% less likely to develop Alzheimer’s disease than non-users after 6 years of follow-up.

Drug repurposing – or repositioning – is becoming more common for creating treatments for diseases.

“The motivation for drug repurposing is because the usually clinical development process for new drug discovery is usually way too long and has many phases,” said Dr. Rong Xu, a drug discovery researcher at Case Western Reserve University. “Most of the time, 90% of the drugs fail.”

The U.S. Food and Drug Administration has approved over 1,600 drugs for therapeutical use, according to the FDA website.

Before a drug can be approved, it must first go through extensive analysis and clinical trials.

“For a clinical trial of one drug, the cost might be more than $2 billion,” Xu said. “Because we already know the safety profile of the drugs, so we’re pretty confident the clinical trials won’t terminate because the drug is not safe.”

However, there are some disadvantages to repurposing. There is a limited workspace for choosing drugs to repurpose, given that there are less than 2,000 FDA-approved drugs, she said.

“For example, you want to search a candidate drug to kidney disease for drug repurposing,” Xu said. “You only have limited space for searching for the candidates.”

Recently, drugs like Ivermectin and Hydroxychloriquine were repurposed to treat patients with COVID-19.

“Recruiting patients for specialty diseases like COVID-19 is pretty fast,” Xu said. “For other ones like for Alzheimer’s disease or for some rare diseases, it takes time to recruit the patients.”

In 2012, the National Alzheimer’s Planning Act – or NAPA – was enacted to increase research for the prevention and treatment of Alzheimer’s disease by 2025.

“One of the ways in which the plan advances is to try and develop drug repurposing opportunities,” Thambisetty said.

The plan also includes tracking progress and the development of treatments.

“It puts the responsibility of advancing the field on Alzheimer’s disease researchers,” Thambisetty said.

These findings from both studies add evidence to showing the value of their data-driven approach to drug repurposing research.

Since the drugs used in the studies are already FDA approved, clinical trials would be the next step, and the timeframe could be shortened.

“We hope that our work, as well as the work of other groups, will eventually lead to the stage where one or more of these effects safe drugs can be brought into the clinic,” Thambisetty said.