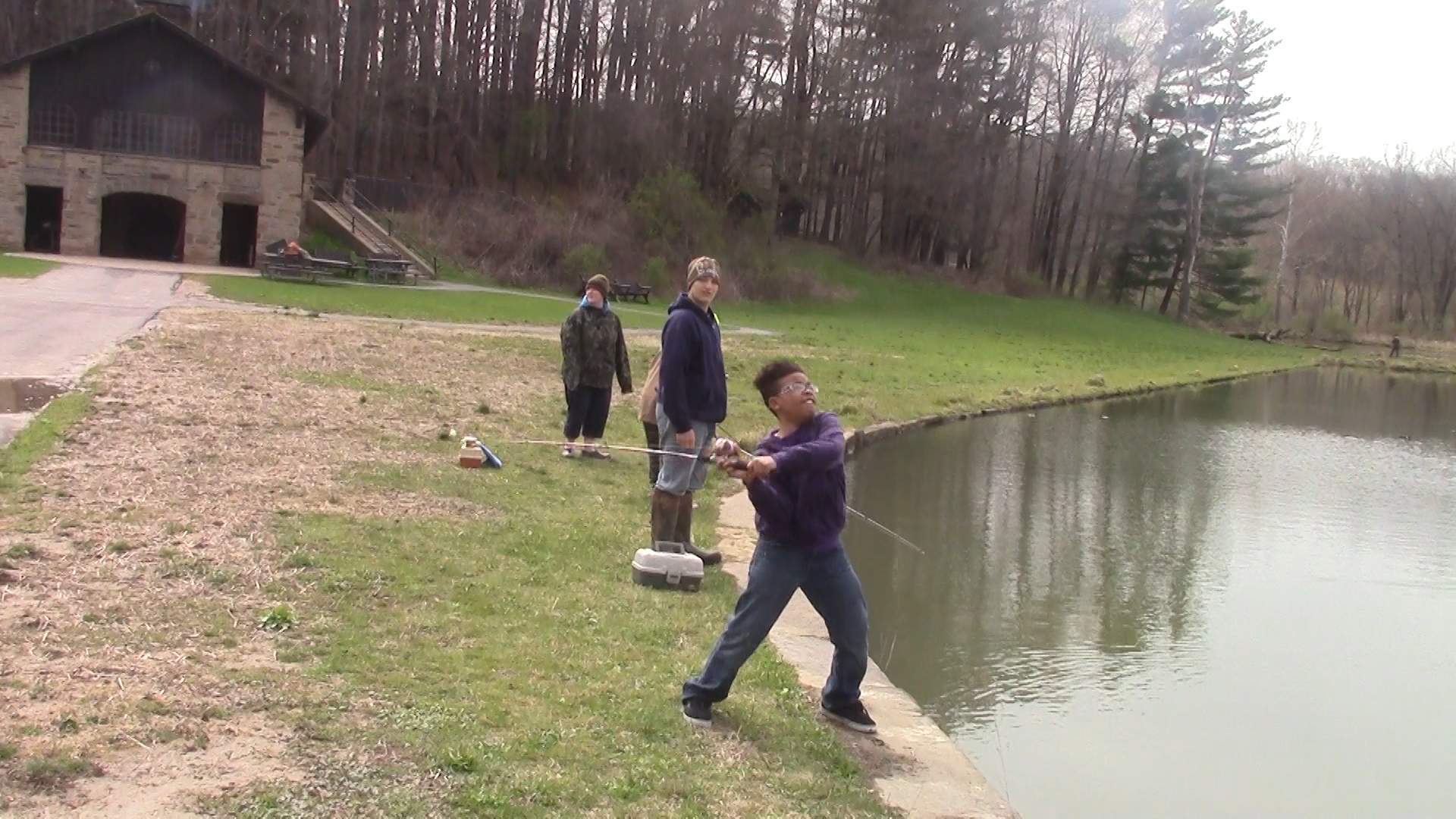 Anchor Intro: With a rise of suburban living, some adults may argue that children are not getting enough exposure to nature. A program offered by national parks across the country allowed kids of all ages to explore their nearest park. Locally, the Cuyahoga Valley National Park offered a program dedicated to fishing. Here with the story is TV2’s Patrick Shade

Objective Track: The crackling of an indoor fireplace-

-and the bareness of the top of the trees.

One may think it’s a cold day in wintertime, but instead, it’s weather for fishing.

The Cuyahoga Valley National Park hosted a fishing program for those ages 7-12 this past Saturday at Kendall Lake in Peninsula. For no cost, participants were able to rent a pole, fish on a dock, and receive advice. Those who felt more comfortable could advance to other portions of the lake.

Dallas Martin came almost an hour from Ashland to join in the festivities. The homeschooled 7th grader ultimately caught no fish, but for a brief moment, he experienced the thrill of victory.

Dallas Martin: “I almost caught a 10 inch large mouth bass, but it kind of threw the hook.”

Stand-Up: Despite temperatures being in the mid-40’s, and more appropriate for a November fall stroll, there were still kids here as part of a program called National Junior Ranger Day, which park officials tell me aims to reel in children to supporting the Cuyahoga Valley National Park.

Objective Track: National parks across the country commemorate the day with special events aimed at young children to help them explore the outdoors.

While just a student trainee overseeing the fishing program, Dan Krieger says that events like these aim to create appreciation of the park.

Dan Krieger: “What we’re doing is we’re trying to create the interest in the parks, so the next generation can use them, and we’ll have the desire to keep them funded.”

Objective Track: Although the last prize given out and the last person leaving the lake signaled the end of the day, the memories will likely last a lifetime.

The National Park Services parks observe National Junior Ranger Day with various activities. In addition to the fishing program for those ages 7-12, children ages 4-6 could explore snails and slugs in a program called Junior Slime Time, held nearby at the Kendall Lake Shelter in Peninsula.

After those programs were done, participants went only a little over a mile east to the Ledges Shelter, also in Peninsula, to take park in National Junior Ranger Day festivities. They were “Sworn-In” as Junior Rangers, and could explore aspects of the Cuyahoga Valley National Park. Those who attend two programs throughout the year receive a Junior Ranger badge, while if four programs are attended, they receive a patch.

The program attracted one individual as far away as Ashland. Dallas Martin, a homeschooled 7th grader who said he had 19 Junior Ranger badges, saw the program while online. While he almost caught a 10 inch large mouth bass, his review of the lake took into account the cold temperatures, which were in the mid 40’s.

“Well, it was a cold day, so there might be a little bit more activity when it warms up,” he said.

Dan Krieger, a student trainee with the CVNP, was observing his 2nd year as a park employee during National Junior Ranger Day. He said that the number of around 20 that registered was a bit higher than the number that came, and that he did not know why some did not show up at all.

To conclude the day, participants could pick a national park related prize from the table in the Kendall Lake Shelter.