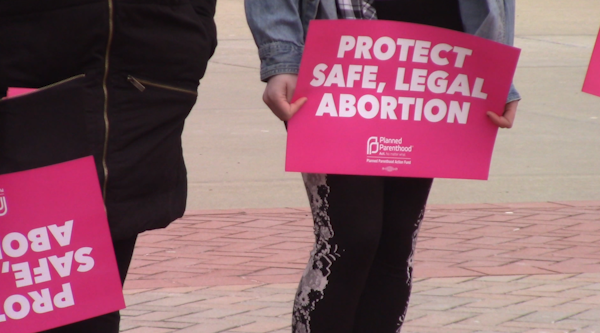 “We’re putting together a rally tonight to protest the recent defunding of Planned Parenthood a well as the multiple abortion bans that have been happening lately,” said group president Kenzi Burchett.

“We’re out here just to get the word out and to just let our legislators know that we are not happy with them,” she said.

Emma Getz, the former group president and current Planned Parenthood activist said, “If you’re not checking the news, if you’re not politically inclined, you my have no idea this stuff is happening until this happens to you.”

Supporters say abortion makes up only a small fraction of Planned Parenthood services. They say the defunding will have a much bigger impact on other services such as STD testing and treatment, emergency contraception and LGBTQ+ healthcare.

“It’s very detrimental especially for those who are receiving medication, or for those who just have a flare-up of sorts that need to be seen,” said Traci Person, the regional field manager for Planned Parenthood in Greater Ohio

After ralliers walked across campus, they met at the rock so they could spray paint it pink and white in support of Planned Parenthood.

Funding will be cut on April 20 across the state.  However, Planned Parenthood says they will not shut their doors entirely thanks to help from local supporters.

“It’s very detrimental especially for those who are receiving medication, or for those who just have a flare-up of sorts that need to be seen.”

“We just want to raise awareness and make a statement that Planned Parenthood does have supporters and that our care is needed,” said Burchett.