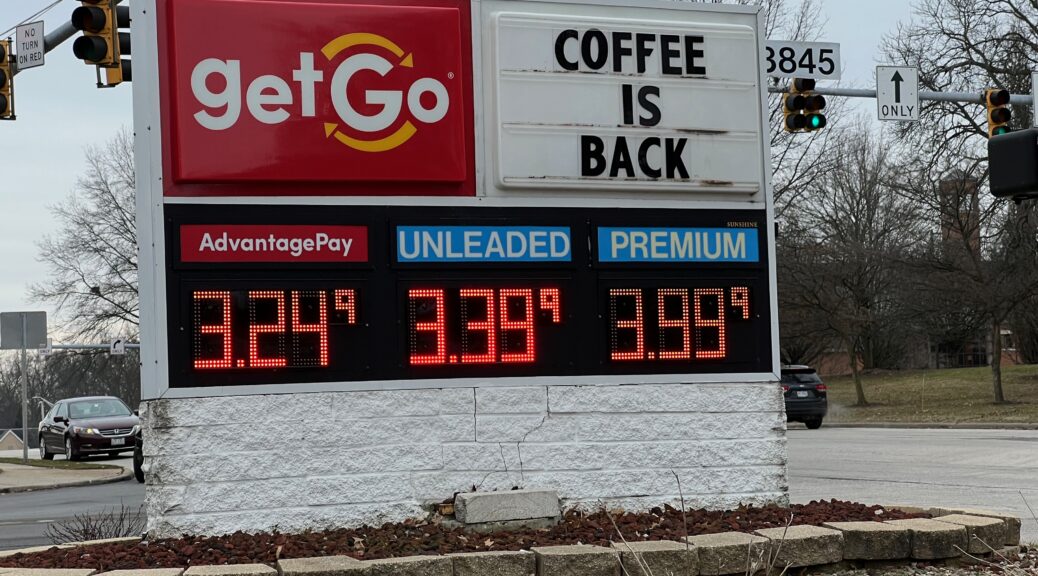 Russia’s recent invasion of Ukraine forced oil prices above $100 a barrel causing gasoline prices to spike upwards. The national average for gasoline in the U.S. rose to $3.65 a gallon, 12 cents more than last week.

Some states in the U.S. are already paying close to $5 per gallon of gasoline, according to AAA.

“Gasoline is the highest it’s ever been in California as of this week, at $4.74 a gallon,” said Lynda Lambert, AAA spokesperson.

In Ohio, the average price of gas is only 11 cents behind the national average at $3.54 a gallon.

The average price in Portage County is $3.50 per gallon, trailing close behind the state average.

Around this same time last year, gas prices were almost $1 less than the current averages. The reason for increased gas prices falls mainly on the price of crude oil, experts say.

“Crude oil accounts for 50-60% of the cost of gasoline,” Lambert said.

While a barrel of crude oil is refined to create gasoline for automobiles, it’s also used to create other petroleum products including jet fuel and diesel fuel, according to the U.S. Energy Information Administration.

Similar to the stock market, crude oil prices rise and fall constantly throughout the days, weeks, and months. As the increased demand for gasoline rose this year and tensions expanded between Russia and Ukraine, prices steadily grew.

West Texas Intermediate crude oil prices were the highest they have ever been since 2011, trading at over $110 a barrel, according to OPEC.

“It’s hard to predict with any exact formula, what’s going to happen [with prices],” Lambert said. “It’s like trying to predict what the stock market’s gonna going to do.

In the oil industry, futures contracts are established to allow sellers and buyers to settle on a price that oil will trade at in the future, according to an Investopedia article.

“Producers and consumers and companies that are consumers are looking ahead,” said Lockwood Reynolds, an economics professor at Kent State University. “They’re going to start to try and demand more oil now. It starts to push the price up immediately.”

Russia is the world’s third-largest crude oil producer producing more than 10.5 million barrels of crude oil every day, according to the EIA.

“A lot of their natural gas is piped through Ukraine to Europe,” he said. “Any conflict in [Ukraine] is likely first off just makes people nervous about what’s going to happen to oil supplies and gas prices.”

The U.S. receives roughly 200,000 barrels of oil a day from Russia. Most of the oil imported to the United States comes from Canada and other countries. Data from the U.S. Energy Information Administration reported the U.S. imported over 52% of oil from Canada in 2020.

Although the U.S. government imposed some sanctions against Russia already, issuing more could limit oil production and cause prices to go up even further, Reynolds said.

If Russian oil production is halted due to sanctions, countries like the United States, Japan, and China would most likely be required to open up oil reserves for distribution.

However, any interruption from Russian exports to Ukraine and other parts of Europe could disturb the global energy supply chain.

A project called the Nordstream Pipeline 2 was initially created to carry natural gasoline from Russia to Germany.

“[It] was a pipeline that went through the Baltic Sea area, rather than going through Ukraine,” said Andrew Barnes, a political science professor at Kent State University. “It means that if Russia has got an issue with Ukraine, and it wants to slow gas supplies to Ukraine, it also ends up slowing gas supplies to Europe.”

The pipeline’s impact on Europe eventually led Germany to sanction Russia for its invasion of Ukraine, he said.

Fewer fossil fuels and less coal-fired power have also created concern for natural gas prices and a growing energy catastrophe across the globe.

As the world re-opens nearly two years after an economic downfall due to the COVID-19 pandemic, gasoline demand adds to the inflation of gas prices. Oil refineries in the U.S. are struggling to keep up with post-pandemic production efforts.

Even predicting the price of gasoline in the future is nearly impossible, Reynolds said.

Gasoline prices aren’t expected to fall anytime soon. As summer approaches, travel is expected to increase to pre-pandemic levels, according to a New York Times article.

“Prices … are set to reach even higher this year due to the ongoing Russia and Ukraine situation and continued post-pandemic production recovery,” Peterson said. “It could take until early fall for us to see prices go down at all.”

Generally, gas prices will also increase in the summer in part due to the government-regulated switch to summer-blend gas, which is more expensive to produce and required to be sold starting May 1, she said.

AAA suggests planning trips ahead of time to increase your fuel economy.

“Consolidate [any] trips,” Lambert said. “If you can, carpool to work or take public transportation.”

Apps like GasBuddy and AAA Mobile also offer options to find the cheapest gas near you.