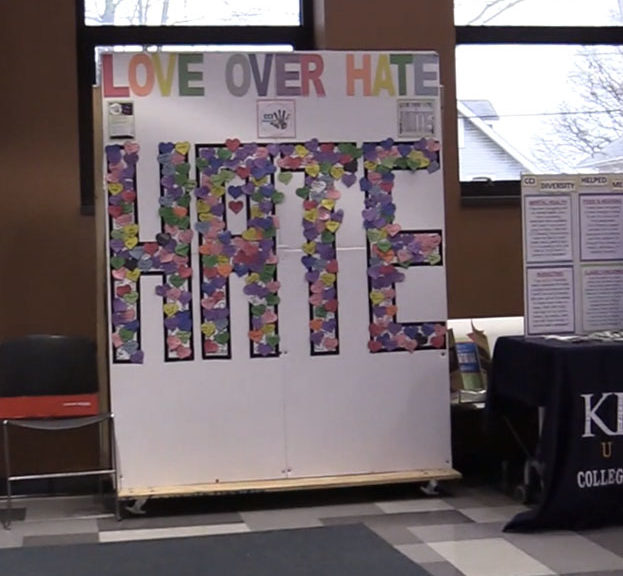 CCI Diversity came to visit Franklin Hall with an eye popping board.

Acacia Freeman, CCI Diversity intern, said, “So today we have a love over hate display. We’re basically just trying to cover the word ‘hate’ up with hearts with positive affirmations, words, quotes, things like that just to spread some more love in the world.”

They also came to share some resources with students while spreading positivity.

AJ Leu, CCI Diversity Director, said, “And so the big love over hate display was our way to sort of just grab people’s attention, and it’s also a way to just spread happiness and positivity, especially at the end of the semester where everyone’s really stressed out.”

“Just because we do diversity a little bit differently than what people are expecting. It’s like ‘Oh, come to the diversity office!’ Typically students wouldn’t think, ‘Oh, I have financial issues, let me go to the Diversity Office.'”

“Just because we do diversity a little bit differently than what people are expecting,” Leu said. “It’s like, ‘Oh, come to the diversity office!’ Typically students wouldn’t think, ‘Oh, I have financial issues, let me go to the Diversity Office.'”

Leu said that anyone can qualify as diverse. Students can come to Room 318 in the library to reach out to Leu for resources.

“I like these kinds of boards and everything. You can kind of just put a smile on someone’s face when they’re just going to class or something like that,” Freeman said.

Jacob Gran, digital media productions major, said, “It’s a good cause. It didn’t take a whole lot of time, and, yeah, it was pretty fun.”

Leu said that they will continue to move to new buildings each week to fill the board.

Leu said, “Yeah, so our goal is, we’re definitely going to carry it into the spring semester just to keep raising awareness.”