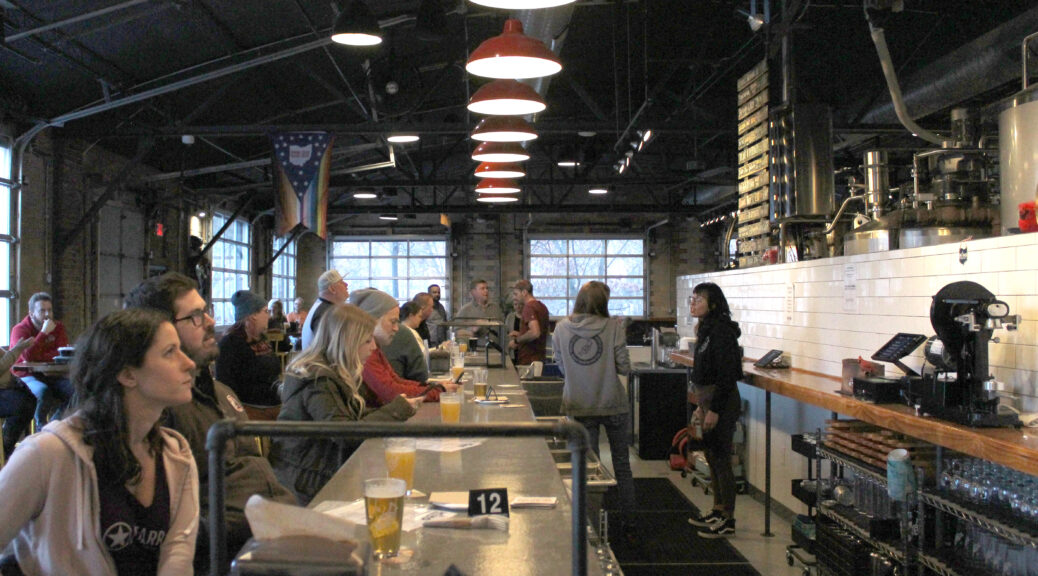 On February 1, the Pheonix Brewing Company in Mansfield, Ohio opened its doors to women from 12 breweries and organizations, all from central and northern Ohio. Together, the women started the 3-week brewing process for a beer set to release on March 8 to commemorate International Women’s Day.

“It was really cool to talk to people and see what their experiences were,” said Jamie Sipps, the sustainability officer and lab technician at the HiHo Brewing Company in Cuyahoga Falls.

“There were a lot of younger women, but there were a few older women there too, that have been in the industry for a while, and learning from them and seeing them was so awesome.”

Before being hired at the HiHo Brewing Company in 2017, Sipps graduated from Cleveland State University with a degree in Environmental Chemistry and worked in Geographic Information Systems (GIS.)

“As a woman in the science industry, I sometimes, but not always, feel that there are times that I’m questioned on if my credentials are really valid,” Sipps said, “it’s one of those things that really sticks in your memory.”

Sipps says that she hasn’t faced that problem since she started working at the HiHo Brewing Company and that events like the collaborative brew help empower women new to the industry.

The beer being brewed, set to release on International Women’s Day, is a farmhouse Saison called Saison of the Witch. Saisons are considered a spring beer, so having the beer start brewing in the winter gives it plenty of time to ferment just in time for the turn of the season.

“It was a great way to interact with different women in the industry,” said Ashlee Glass, an attendee at the collaborative brew who works as the manager and events coordinator for the HiHo Brewing Company.

Glass started working at the HiHo Brewing Company after frequenting the brewery while working at the Akron Children’s Hospital. “This became my fun money dump, and then, I don’t know, I came here full time and I love it,” Glass said.

The community of brewers in Northeast Ohio is tight-knit, with small breweries often planning events together and even helping each run their businesses.

“It’s not all about drinking beer, it’s more about education and continuing to grow and be diverse.”

Jennifer Hermann, co-owner of the Bell Tower Brewing Company has been brewing for over 30 years and helped create a professional social club for small brewers to share knowledge and experience in 2016.

“We would meet monthly at a brewery, just to share ideas and to make sure that everybody knew each other,” Hermann said.

The breweries would plan brews, help each other with equipment and the brewing process and even help newer business owners with their taxes.

Hermann was unable to attend the collaborative brew due to reasons related to COVID-19, but is back and brewing now. But this wasn’t the only problem COVID-19 caused for Hermann and the Bell Tower Brewing Company.

The brewery was originally set to open in 2020, with Hermann and the other co-owners being set to close on the building just one month before the pandemic hit.

While the pandemic was at its peak and Hermann’s business was up in the air, Hermann found comfort in homebrewing.

Hermann had been homebrewing since 1988, with the hobby sparking her passion for the art of brewing. “I was brewing every weekend,” Hermann said. “I brewed more beer in the past two years at home than I probably did in my previous 10 years of home brewing.”

The Bell Tower Brewing Company was finally able to open its doors last October, starting with a soft open, now the brewery is fully up and running.

The number of craft breweries in Ohio has been on a steady rise for the past decade, and things aren’t slowing down. But, according to the Brewers Association women in the brewing industry only make up 7.5% of the nation’s head brewers.

For Hermann, Glass, Sipp and women’s representation in the brewing industry as a whole, there’s a long way to go, but things are looking up.