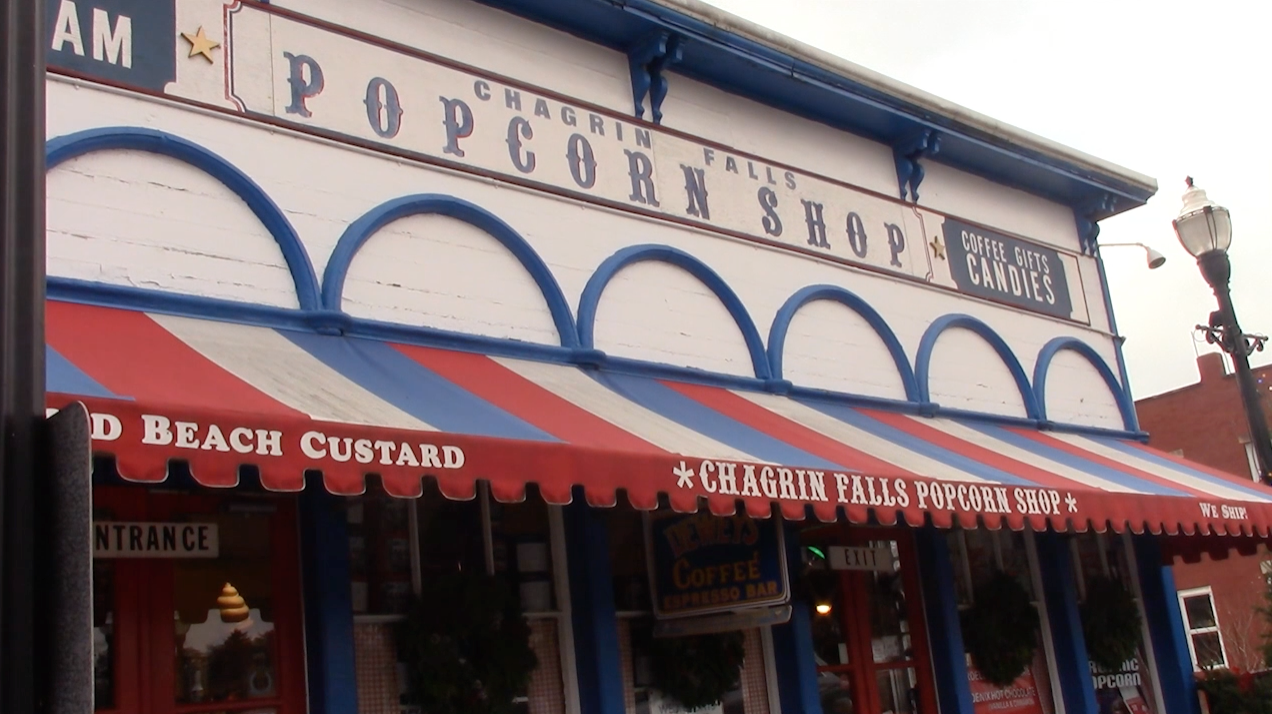 Nestled between the roaring falls and quiet local shops, lies a piece of history in Chagrin Falls, Ohio.

The Chagrin Falls Popcorn Shop holds an intriguing history, and that history may be how it manages to thrive today’s modern market, after ownership changes, physical damage, and more.

Sitting between the Chagrin Falls waters and a string of local shops, the Popcorn Shop is one of the oldest buildings in Chagrin.

The building first began in 1875, as an office for the adjoined hydro-mill powered by the Chagrin River. Throughout the years the store would sell wheat. shoes, meat, or even haircuts. President of the Chagrin Falls Historical Society John Bouriseeu noted the significance of the building to Chagrin’s image.

In 1949, after the last of the mills in Chagrin were discontinued following the widespread adoption of electric power over steam and mill power, a local woman named Dorothy McClennan, purchased the building. That same year, McClennan turned the building into the Chagrin Falls Popcorn Shop, selling homemade candy and popcorn.

The building would see more than just haircuts and Popcorn, however. President George W. Bush, campaigning for his second term, made a stop in the building with the First Lady and their daughters. Though the President purchased a tin of popcorn, he forgot to bring it with him, and the tin still sits in the shop. General Manager of the Popcorn Shop Patti Raymond thought the tin was worth holding on to. In the year 2000, the building needed repairs after a van’s brakes gave out and it crashed into the building, nearly knocking the building off its foundation. For two years, the shop remained hanging over the falls, until local entrepreneur Dewey Forward, purchased the property.

“But Dewey Forward rebuilt it and brought everything back up to code,” said Chagrin resident Jan Jones, “and here we are with an unbroken timeline of history.” The Popcorn Shop, though damaged, maintained most of it’s original infrastructure, including windows, walls, chimneys and more. Many Chagrin residents spoke highly of the stores antiquity.

“If you see a building that’s old,” said Jan Drummond, “you’re more apt to go inside and see what’s unique.”

“I think that when people come to Chagrin Falls,” said Jones “and they see history in front of them and well preserved history, it does bring people here and it does make a difference.”

While some simply enjoy the history and nostalgia of the shop, others think buildings like the Popcorn Shop add to something larger than the sum of its parts.

“It’s a people town.” said Chagrin resident Cassandra Moran, “There’s very historic buildings but it’s the people that are part of the buildings.”