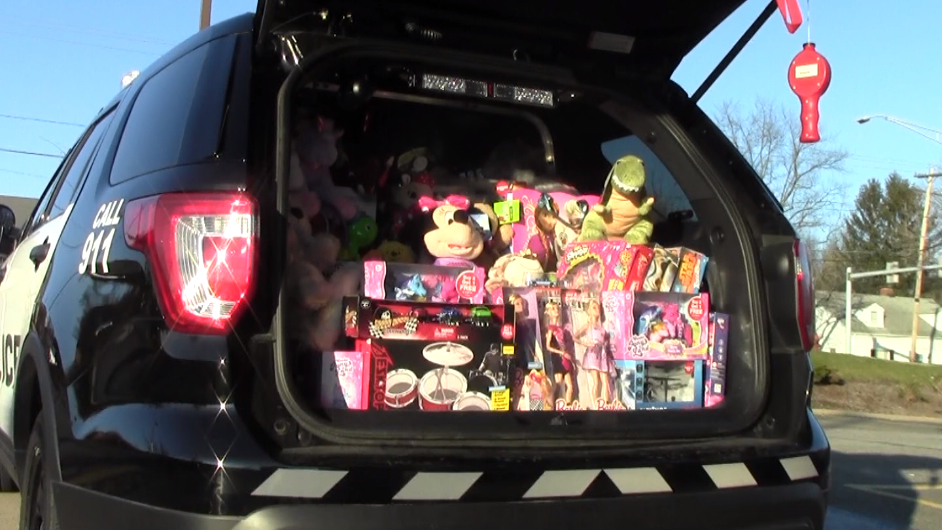 Santa Claus may be known to wear a red suit, but in Stow, Ohio, he wears a police uniform.

On Saturday, Dec. 5, the Stow Reserve Police Unit teamed up with Toys For Tots for the Unit’s annual “Fill-A-Cruiser” event.

From noon to 4 p.m., two reserve officers collected toys in front of Walgreens at the corner of Darrow and Graham Roads in Stow. “We’re always looking for something to donate to the city itself, no matter what it is,” said King.

“We’re always looking for something to donate to the city itself, no matter what it is.” – Ron King, Captain, Stow Police Reserve Unit

King said even children were participating in the generosity.

“I’ve really been impressed with some of the little kids that have donated the toys and came over here and gave us the toys without wanting to keep them for themselves,” he said.

According to King, donators were generous and had different ways of donating.

“People have been pretty generous. Some of them have gone in to buy toys in there and bring them back out and donate them. And other people have come and just dropped them off.”

In the officers’ four hours on duty, donators filled up the trunk area of the SUV cruiser as well as the backseat. The toys were then taken out of the cruiser and boxed up by Walgreens employees. The toys will go to underprivileged children in Summit County and across the United States, in coordination with Toys For Tots. Founded in 1947, Toys For Tots is a program run by the United States Marine Corps that collects and distributes toys to children whose parents cannot afford to buy them Christmas presents. Donations to Toys For Tots are new, unwrapped toys, and collection happens during October, November, and December of each year.

Every year, Toys For Tots teams up with businesses and police departments across the United States and holds events, just like Fill-A-Cruiser in Stow, to collect toys.

The Stow Reserve Unit is just one of the thousands of police units across the nation who team up with Toys For Tots to collect toys for underprivileged children.

“Here we’re reaching out farther than just Stow,” said Massingill. “We’re also going to be able to help kids in the local areas that might not have anything for Christmas.”

“Here we’re reaching out farther than just Stow. We’re also going to be able to help kids in the local areas that might not have anything for Christmas.” – Fred Massingill, Officer, Stow Police Reserve Unit

The Reserve Unit is a unique outfit in Stow, much like other reserve police units across the country. Reserve officers are non-sworn volunteers. According to their website, reserve officers workers compensation and a monthly stipend.

“The Reserve Unit is always there to help – no matter what – the citizens and everything,” said King. “I’ve been around a long time with the Reserve Unit. It’s always been an enjoyable outfit to be with.”

Reserve officer duties include checking the homes of residents on vacation, vehicle lockouts, and traffic detail. Reserve officers also assist with weather emergencies and at events like football games and town events that need help with managing traffic.