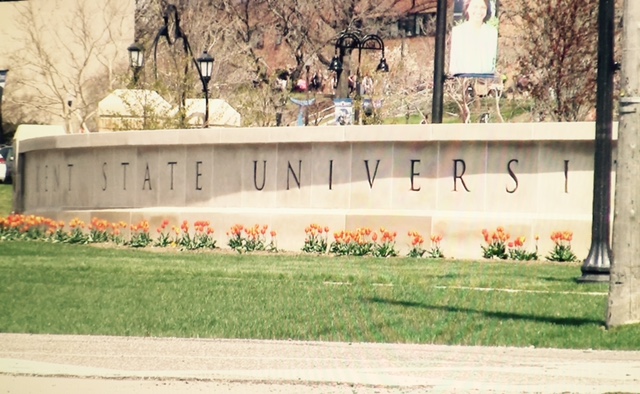 The ceremony to top them all is coming up at Kent State, graduation. May eighth and ninth there will be a total of five commencement ceremonies here at Kent State’s MACC Center where some forty-seven hundred students will graduate. With such large ceremonies hosting nearly four-thousand guests at each one, the amount of work that goes in to each one is great. The Kent State University Ceremonies, Events and Special Programs office has the task of making it all run smoothly. In particular, assistant director Lisa O’Connell. From balloons to programs to President Beverly Warren, they handle it all. Reporter Lexi Walters tells us just how this ceremony turns out each year.

While Kent State University students cross the stage and enter into the threshold of true adulthood at graduation, they usually have one thing on their mind, don’t trip. More than 4,700 students will take that walk this May 8th and 9th at the Kent State MACC Center next week and some 20,000 families and friends will watch with pride. This is the largest graduating class Kent State has seen thus far.

These graduations are split into five different ceremonies over the 2 day period. With all these people graduating and attending to watch, that means many programs to be read, balloons to be inflated and chairs to be set up. In order to make this day the special one we know it to be, someone has to take charge and keep it all on track right down to the very last detail.

Assistant director for the university ceremonies, events and special programs Lisa O’Connell has that job. She works with the director of the department to put on not only these ceremonies but many others throughout the academic year. This one however, is her biggest priority as of lately. She has worked with the office for 3 years now and knows the ins and outs of what goes in to such an elaborate event.

With such a growing number of graduates, President Beverly Warren has discussed having an outdoor ceremony at Kent’s very own Dix Stadium. The venue could hold many more people and weather depending could be much nicer than so many people being inside a building. While these ideas are only in talk, this could be a plan Kent State sees in its near future.

May 9th 2015, the day that many Kent State Seniors have been working toward since they arrived at Eastway their freshmen year. This day, the MACC center will be home to their commencement.

They will walk up to receive one small piece of paper that symbolizes so much. As they say goodbye to these buildings and comfort of what’s been home the past four years, they enter into alumna status.

NAT SOUND
While the graduates wait patiently to cross the stage and the families are in the stands watching with pride, have they ever looked around and thought, what really goes in to this elaborate ceremony? With more than 4700 students crossing that stage in a matter of 5 ceremonies in 2 days, hosting 4000 guests at each ceremony.who takes on the job of making it al come to life?

That would be Lisa O’Connell, assistant director for the university ceremonies, events and special programs.
SUB SOUND

Lisa has been with the ceremonies office for 3 years now and while the department started with a mere 2 people. There are now 4 positions and they continue to grow with their workload.

Stacee Starr, a Kent State student had the privelege of working with Lisa and the department since and wants people to know how much work so few people are able to accomplish, but not without some challenges.

Stacee will work closely with Lisa and the ceremonies office to make sure everything from the president at the podium to the tassles on their caps are in the right place.
And while everyones eyes are on the graduates, maybe not noticing the work around them Lisa knows that was the goal… to give them all a day to celebrate and focus on the accomplishments of all those hard working graduates who cross the stage that day. For TV2 KSU Im Lexi Walters