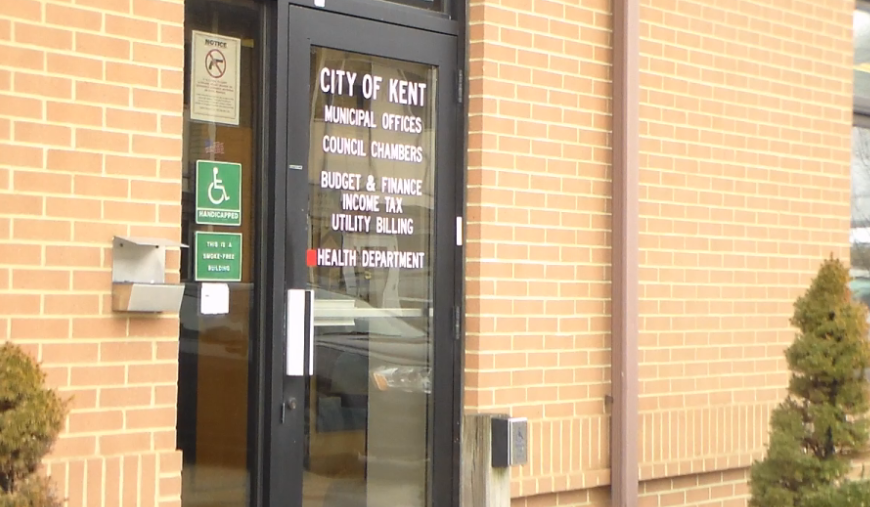 ANCHOR: As Kent continues to grow and develop, many buildings are getting a new makeover and a new identity, like the Kent city hall that was recently sold for such a good price it has Kent officials scrambling to get out now. Tv2 reporter Alexandrea Rehner has more on the story.

REPORTER: Last Wednesday night City Manager, Dave Ruller led the proposals at the council meeting for the location of the temporary city hall.

After selling the current city hall buildings on East Summit street in February to a Cleveland real estate developer for $2.4 million. Almost double its listing price.

With the developer planning on construction in June, the race is on to choose a temporary city hall building on such short notice. The 4 possible locations for the temporary city hall are: the former Kent Municipal Court on South Water street, the Family and Community Services on Gougler Avenue, Franklin Elementary on State Route forty-three, and the Public Service Department building on Overholt drive.

With sixty different variables to consider. With some of the biggest concerns being cost and accessibility, Community Development Director, Bridget Susel, says the council isn’t looking to lose their new found profit from the sale just to keep city hall in downtown Kent.

Bridget Susel SOT:”Our community isn’t that large. The geographical footprint from farthest point to farthest point is only 9.3 miles. So while we would maybe be in the downtown core, if we could save significant money by just going a half mile away from downtown. We would definitely consider that.”

REPORTER: With so many factors to consider and accessibility being one of the most important for Kent residents. What do locals choose? Cost or accessibility?

Kent officials have alot to consider, but the choice seems pretty clear to some residents when it comes to the city saving money by being farther away. This is what some locals had to say about the relocation.

Evan Yutzy SOT: “No. I think that they should do the cheaper. It sounds more lucrative for everybody. And it sounds like it would be the best option. And if it can fit everybody then go ahead and do it.”

Alexandra Anderson SOT: So I think, you know, they should try to cut the budget. See what type of money they can save in going outside of Kent.”

With more data to collect on all four locations to ideally house all the city employees for the next two to three years, Kent officials have a lot on their plate. With construction to build the new student housing to fit one hundred and twenty-six beds beginning in June means time is only running out.

ANCHOR: With the officials still searching for a temporary location for city hall, there are still no plans right now on where and when they plan to build a more permanent facility.