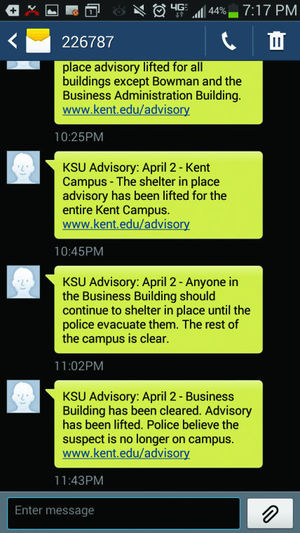 Many students at Kent State rely on  Flash alerts to get their updates on whether class is cancelled, but the alerts do more than just give weather updates. They alert subscribers of emergencies and possible threats on campus, but not all criminal activity is reported through Flash alert.  Reporter Lexi Walters found out what made an occurrence worthy of an emergency Flash alert.

Some students, such as Junior Annie Artiste, had a run in with police activity occurring at The Province Apartments and wondered why she never received an alert from the university.

On October 15, 2014, a man carrying a knife pounded on doors at the apartment complex, attempting to enter. Police arrested the man on charges of aggravated menacing a few hours after the occurrence but no alert was sent to Flash alert subscribers about the danger.

According to the Clery Act, which is the policy Kent State follows as to what they must alert people,  events which pose a serious or ongoing threat to students and faculty be reported through alerts. This happening was not considered ongoing because the police apprehended the suspect right away.

Students gave their input as to how effected they felt Flash alerts were. Two students, Tori Scarnatti and Anna Trevarthan gave mixed reviews about Flash alerts. while Trevarthan felt she received plenty of alerts, Scarnatti said she would prefer they at least update students on what is going on even if the danger is no longer, so students can have peace of mind.

All students are capable of receiving these alerts through kent.edu/flashalerts by simply entering their cellphone information and flashline account.

FlashAlerts, nearly 52,00 students and faculty receive them in texts and emails at Kent State. They go out when the weather is poor, classes are cancelled or when registration is about to begin. More importantly though, Flashalert subscribers receive notification when there is criminal activity on or near campus.

Nearly 20 Flash alerts were sent out fall semester of 2014 and 29 have been sent out so far in 2015 regarding all flashalert topics and Only a handful of those were crime related. But was there criminal activity this past school year that wasn’t reported through flashline messages?

Kent State Junior Annie Artiste who lives in the Province Apartments directly across from campus recalls an incident in October, where she came home to multiple police positioned to arrest someone in the building across from her, but no flash alert was sent out.

According to Kentwired.com a man was arrested at the Province. He was arrested for aggravated menacing after having a kitchen knife while knocking on doors at the apartments, trying to enter.

So why weren’t students alerted of a possible “menace” near campus? THE KSU police department directed me to the Clery Act which is the policy the campus follows on what events to notify subscribers about.

KSU spokesman Eric Mansfield said no one was notified of this because the suspect was arrested right after it occurred. Mansfield said a strict format is followed and word of a dangerous event travels from the campus police to the University media relations who decides to send out alerts.

All students can sign up for flash alerts at kent.edu/flashalerts to receive notification of emergencies, weather alerts and other critical news. For TV2 KSU I’m Lexi Walters